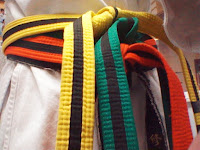 So today I want to finish up with our 4 part series on the different learning types, and how you as a teacher of a karate class can help each student.

So far we’ve covered visual and auditory learners, which you’ll recall make up the majority of our students. However there is one group that requires a different approach to learn. This group makes up about 5% of the population and learns best through “doing”. Often these students appear as the “odd ones out” in class because they learn differently. These are our…

If we go back to our simple tests to help determine learning types, you’ll notice people who learn mostly through the kinestheic process have a few common traits. Kinesthetic learners tend to fidget during visual and auditory instruction, look down as they internalize and work through their thought process, and use words and phrases that are action-based like “I understand”, “I feel”, “Let me try that”.

Some instructors mistake this as “a lack of confidence” when they see a kinesthetic learner looking down when practicing kata for example. When really, they might be thinking through and internalizing the actions of the movements. (Contrast this with a visual learner and might see them looking up left when trying to think of the next move.)

Ok, so how do we teach Kinesthetic Learners if they learn only by doing?

First off don’t expect your KL to participate in a group discussion, or listen and repeat what you just said. In my experience KLs will often be off in their own little world.

Fortunately for us as instructors, KLs are actually fairly well suited for martial arts since it’s action-based. Repetition is key and this is exactly how a KL learns best. So don’t be afraid to have your KL practice something over and over again. And dont’ be afraid to have them practice by themselves – they like it. Where as those VLs will be too busy messing around or easily distracted by the group if you ask them to do individual kata practice for example.

Also you can challenge KLs by asking them to practice something a certain way and then change one of the variables and ask them to “figure it out” for themselves. Example: Have your KLs practice a kata application but change the attack to use the other side of the body. Does the bunkai still work? In a lot of cases it will with slight modification. Have them discover it for themselves.

When KLs ask you a question, fire it back at them and ask them using the Socratic method, “Well how do you think that could be achieved?” and “Why do you think that?”, and “Based on what you just said, how does that make sense?”

This helps them learn because they will think through the challenge, feel it and understand it. (Contrast to VLs who just want you to show them!!)

So we’ve learned more about each of the learning types in this 4 part series, and you’re now better equipped to teach. The challenge for you now is to take this knowledge and use it. As instructors we should always be looking for ways to help our students learn faster, retain more and improve their skill sets, as well as our own!

It’s important to realize that just about everybody uses a mix of learning processes, and very rarely does a person rely solely on ONE learning process. Nearly everyone has ears and eyes and will use them. However, most people have a dominant learning process and it’s up to you to discover which process works best for each and every student.

Since you’re probably teaching mostly to a class of karate students (versus private instruction) you’ll need to incorporate ALL of the teaching methods for visual, auditory and kinesthetic learners to cover your bases. Adopt a “no student left behind” policy. If you do have the opportunity to work in a private-class scenario, be sure to predominately use the teaching method that works best for your student.

Here’s a great kids karate game you can use as a warm-up or a reward at the end of class, that kids go crazy for…

It’s called “The Safe Game” and here’s how it works:

Try it out and let us know how it works for you!