Yesterday afternoon just before class began, I had a mother and son walk in to the dojo.

They were very nice people and expressed interest in our program.

Nothing I like more than nice families and eager students wanting to learn.

So they decided that the son would try class right there and then. While his mother was filling out the paperwork, I asked her how she heard about our school. She told me we were highly recommended by someone at the place where she works.

Reputation is important and we’ve recruited loads of students through referrals.

When she passed me back the clipboard and I asked who it was that recommended us. She mentioned a name I didn’t know. As I pondered who this mystery person might be, I thought it definitely wasn’t an existing student’s name, nor a parent’s name I was familiar with. Perhaps it was another family member’s?

I desperately tried to think who it might be… and then she added something about a presentation last week.

Still, I was still drawing a blank. There were no bells ringing in my head.

Anyhow, while his mother watched the son tried class and had a blast. His father arrived shortly after to watch the remainder of the class too. They’re a really nice family and all were delighted with our program. We spoke for a few minutes after, got to know them a little better, and they’re scheduled to come back again next week.

However, for the life of me I still couldn’t figure out who the mystery referral person might be. Then it occurred to me – the bell rang loud and clear in my mind. This wasn’t a name I knew and we didn’t have a “presentation” last week (whatever that might be). I was beginning to think that this referral wasn’t meant for us at all!

It was probably meant for one of the TKD schools across the road. (Heh, heh, heh!)

But as fate would have it, they walked into our dojo instead. Now the son is excited learning karate with us, the parents are happy and I’m certainly glad to have them part of our club and not our competition’s.

Whatever way people find your dojo doesn’t really matter. The important lesson is that you take full advantage of each opportunity and give them the best of your ability in terms of instruction and service. 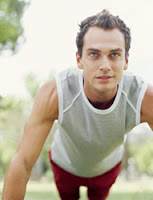 Real fast – crazy busy day, but I want to quickly share this push-up exercise with you…

I call these “Walking Push-ups” and it works like this…

Once your class reaches the other side of the tatami, have them return to the start position, moving backwards! (This is actually quite challenging for many people).

A variation of this drill includes “springing forward” after each push-up where both hands and feet leave the floor. Just rock your weight backwards a little to bend the legs, then spring forward, push-up and repeat. This one is especially challenging when moving backwards.

P.S. In my 125 Dynamite Drills there are hundreds of skill and strength building exercises, including 14 other push-up exercises you can use with your class (or at home if you want to get in some extra training).