When a new student joins your dojo, it’s important that you give them something they are looking for in their very first class. Take the time when they’re filling out your paperwork to ask them, “Why do you want to do karate?”

Most will reply, “For self defense”. The second most common reason will be “Fitness”. And then you’ll get a few with random other reasons, like “self discipline”, “something to do” and a few will say, “I’m not sure”.

Use this information to do something in their very first class that at least involves one of their reasons for trying class.

For example, for people who tell you “Self Defense” you’d want to give them a practical and effective skill with which to leave class. Or if they told you “Fitness” then you’d want to make sure that in class they worked up a good sweat and left class happy.

Years ago when I was starting out as a novice instructor, I fell into a trap that just about every new instructor falls into. I was worrying too much about having my students make perfect stances, ensuring their hikite was pulled right back, and droned on about the history of the style.

I was teaching what I THOUGHT they should learn in their first class. Not what they WANTED to learn. I know this is a challenging thought for many instructors, but let’s consider why this is important…

There’ll be plenty of time to teach your new student the finer details of karate later. You’ll have ample opportunity to teach what you want to teach later on. But if you don’t give them a reason to continue, all that wasted time and effort trying to teach something that they don’t yet appreciate won’t count for anything.

You’ll be frustrated because they won’t be interested. And your new student will be left feeling unsure if they want to continue.

Likewise it’s intelligent to avoid doing loads of repetitive basics if they’re looking for a quick and effective defense solution.

(That’d be kind of like going to the grocery store and wanting to buy an apple, but the grocer gives you a pear. Yes, they’re both fruits, but each leaves you with a different taste.)

Of course you can’t please everyone, but I can tell you from experience this approach works well. As I said at the beginning of this post, it’s important to LISTEN to your new students and discover their reason for trying class.

And when you use that information well, their first impression will be a positive one, and your chances of retaining them will be increased significantly.

If you’ve been teaching karate for any length of time you’ll know that one of the struggles with some students, particularly kids, is to get them to do their technique as fast as possible.

I don’t usually have trouble getting this point across to my youngest students – they’re full of energy and really try hard. And my adults understand the importance. It seems to be the lazy pre teens who can’t be bothered giving their all with each technique.

Often I ask them, “Is the the world’s slowest punch competition?”

Which of course a resounding, “NO!” can be heard but still they refuse to punch at their speed potential.

It frustrates me that they don’t seem to understand why achieving combat speed is so important. I ask them things like, “You know what happens when you practice punching slow?”

Which they respond with, “You get really good at punching slow.”

So I know they understand, they just won’t apply.

This used to frustrate me until one day I came up with a solution….

I interrupted our basics and stood directly in front of one of the slower, more lethargic of the group and took my forward stance. I then said, “Let’s see how fast you can punch Robert. On the count I’m going to punch you in the chest as quickly as I can and you’re going to try to punch me as quickly as you can. You’ve got to beat me to the punch, ok?”

At that moment I could see he was a little uncertain about what was about to happen.

So I counted, “Ichi!”, and tagged him in the chest before he’d even gotten his punch away.

I didn’t hit him hard, but I definitely made contact to give him a little “wake up”. At that point he realized a couple of things:

“Ni!”, as I tagged him again. Now he stopped smiling and got himself in the zone.

“San!”, and we struck simultaneously, ai-uchi.

“Go!”, as he beat me to the punch. “Alright, now we’re getting somewhere!”

The rest of the students in class also picked up their speed. I could tell that they didn’t want to take on the sensei in a speed challenge, nor did they want to get hit, so miraculously they increased their speed to their potential.

Do I still have students who slip back to lazy town? Of course, we all do. But every time this happens, they now know the sensei speed challenge is coming.

Of course from this I remembered a simple reaction exercise in which students pair up facing each other in forward stance. Then on my count they’ve got to try to tag their partner first with reverse punch, just like Robert and I did. For each successful punch they receive a point. After 10 punches students compare scores.

Simple really isn’t it… and it’s a good precursor to teaching karate point fighting, where the first to score wins the point.

Back in ’92 when I first started teaching I told my Sensei what I was going to work on in class with his students. I had a detailed lesson plan with more technical information than my class could possibly absorb in 60 minutes.

After I finished explaining to him, he raised an eyebrow and said, “That’s all good stuff, but remember some people come to class because they just want to work hard and go home sweaty.”

As I thought more about what he said, I realized I’d crammed too much information into my lesson plan. In fact I was doing this all too often when I taught class. While I was passionate about what I was teaching, I didn’t realize my class might not be as enthused hearing me drone on about the finer details of making a perfect reverse punch for the 15th class in a row…zzzzzzzzzzzzzz. 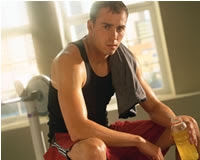 And of course this should have been something at the forefront of my mind when planning my class, since fitness is the #2 reason people take martial arts in the first place.

However like many novice instructors I got bogged down in wanting my students to have perfect technique, and I forget about making class physically challenging and enduring for them.

Take note of how you teach, what you teach, how much you talk and how much time your students spend working hard in your classes, and try to strike a good balance between developing technique and improving fitness.